‘Derby Says No To Hate’ 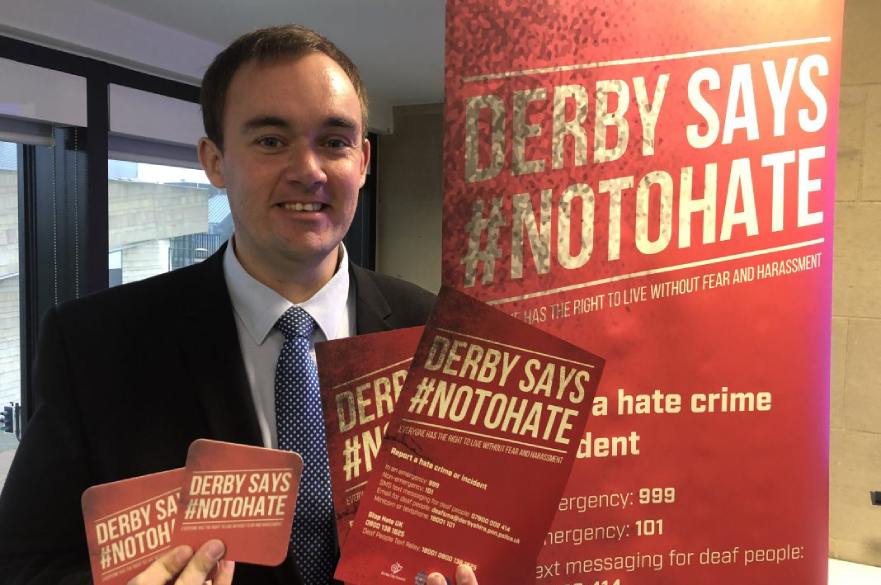 Derby City Council is launching a new campaign to help combat the rise in hate crime.

‘Derby Says No To Hate’ will focus on the city centre and night time economy and reinforces our commitment to ensure the city is a safe and welcoming place for all residents, workers and visitors.

The campaign has been timed to coincide with National Hate Crime Awareness Week (12th-19th October) and aims to increase understanding of hate crime and how to report it.

The campaign will also stand by victims of hate crime, to inform the public that as a city we will not tolerate hate crime in any of its forms.

There was a 14% increase in hate crimes reported in Derby in 2018/2019 compared to the previous year and feedback from partners and members of the community show that those working in late night industries such as taxi drivers, takeaways, licensed premises and those visiting licensed premises are most at risk of experiencing hate crime.

DCC Officers will be visiting licensed premises, takeaways and taxi ranks, delivering posters with reporting information, stickers and an information sheet on how best to report incidents to the Police or Stop Hate UK. This information is available on our website.

The campaign was welcomed by Derby Pubwatch whose members report an increase in hate related incidents in licensed premises and are pleased a campaign focused on the city centre will highlight the issue to the public and encourage people to make reports.

As a council we are taking this issue very seriously. We want people to be confident that Derby is a safe and welcoming place and anything we can do to reduce hate crime is to be welcomed. However, it’s also really important that we help those who are victims of hate crime to feel confident in reporting incidents and feel supported when doing so.