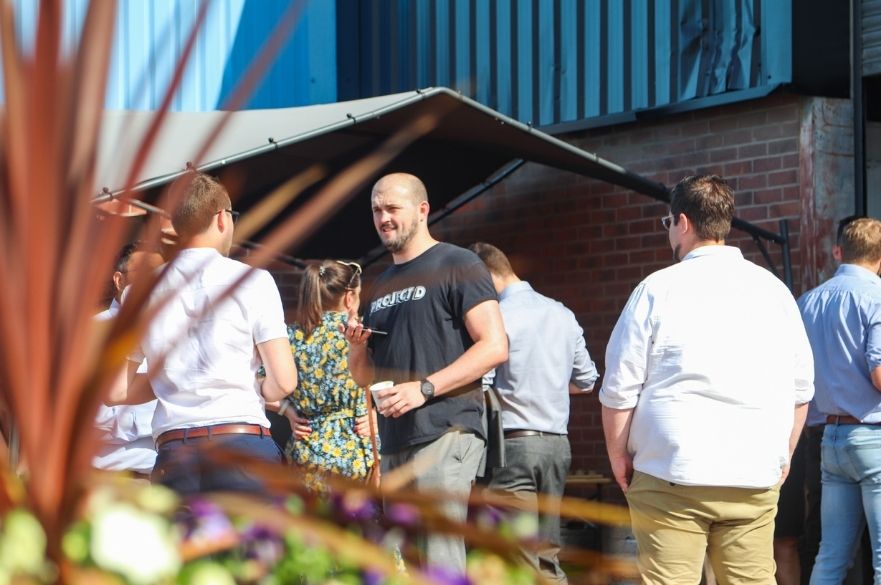 Jacob Watts, co-owner and Strategy Director at Project D gave an update on how Ascend helped their business.

A £5 million business growth programme has been launched in Derby, to help local businesses innovate and expand.

The new programme – Ascend – was unveiled yesterday (Monday 19th July) at an official launch, held at Bustler market, with over 125 delegates in attendance.

The Ascend programme will support up to 40 local businesses over the next two years and aims to create over 500 jobs. Applications are open to businesses based within seven and a half miles of Derby city centre, who commit to creating jobs for Derby residents, graduates, or students.

Ascend – part of the city’s coronavirus economic recovery strategy – is being run by Derby City Council alongside the University of Derby.

Businesses chosen to participate in the programme will be able to access bespoke support and advice, to help develop and implement business growth strategies and where appropriate prepare an investment case for equity investors or access loans for capital investment where traditional finance is not available.

Luxury doughnut-maker Project D, which has recently created 100 jobs and moved into a new bakery in Spondon, was chosen to pilot the project. At the launch event, Jacob Watts, co-owner and Strategy Director at Project D gave an update on how Ascend had helped their business.

The Ascend team helped us out in two key areas that we wanted to develop; making improvements to our supply chain and also procurement,” he said. “The advice we’ve had is invaluable. We obviously had an idea of where we wanted to go, and how we wanted to grow Project D, but to have experts there to push you in the right direction, support you, and connect you has really been invaluable.

Proverb – a natural and organic skincare brand – has also received support from Ascend. Below,Proverb founder Luke Sherriff talks about his experience of the programme’s support.

The Ascend team has appointed an expert panel including senior officials from the council and university, business advisors, investors and entrepreneurs to consider applications.

Retaining graduate talent is a challenge for most university towns and cities in the UK, and it requires the availability of opportunities for students to start their careers or set up their own business ventures.

To create those opportunities here, it is vital that businesses in Derby have the support they need to innovate, attract investment and grow. That growth will generate the need for the skills and knowledge that our students acquire through high quality teaching delivered by the University, and which they can develop further through excellent work experience placements in industry.

I am very pleased that the University is part of this exciting collaboration to propel the potential of businesses in our city and create the opportunities which our students will identify as integral to their decision to study in Derby.

Derby City Council Leader, Councillor Chris Poulter, said the aim of the Ascend programme was to develop ‘an entrepreneurial eco-system’ in Derby. He said:

We want to make our city a fantastic place to establish and grow a business, to create high-quality and sustainable jobs while, at the same time, supporting and diversifying the local economy.

Proverb and Project D are two shining examples of businesses on the up in Derby, who Ascend have and will continue support in their ambition for structured growth and jobs.

Gareth O’Donovan, Head of Economic Growth at the Derby City Council added that the Ascend team’s ambition was to see Ascend grow after the two-year pilot.

The programme will initially run for two years, but really we want this to become a permanent fixture for Derby; we’ve seen the success the city can have when public and private sector work together.

Ascend will bring in experts in leadership, business modelling, growth strategy, financial planning and technology development to nurture the ambitions of our brightest companies and help them achieve their potential.

Derby is a fantastic city and home to some of the UK’s most ambitious and enterprising businesses – something which the Ascend programme seeks to fuel even further.

The Ascend programme will not only help bolster and diversify our local economy, but also help up and coming businesses thrive, providing them with opportunity to realise their ambitions and have a positive impact on the wider community.

The Derby economic recovery strategy, of which Ascend is a part, has three core aims – to stimulate business and investor confidence in the city, diversify the local economy and enable decarbonisation.

Other major initiatives within the city’s economic recovery strategy include:

For more information about the programme, or to apply, visit the Ascend website.