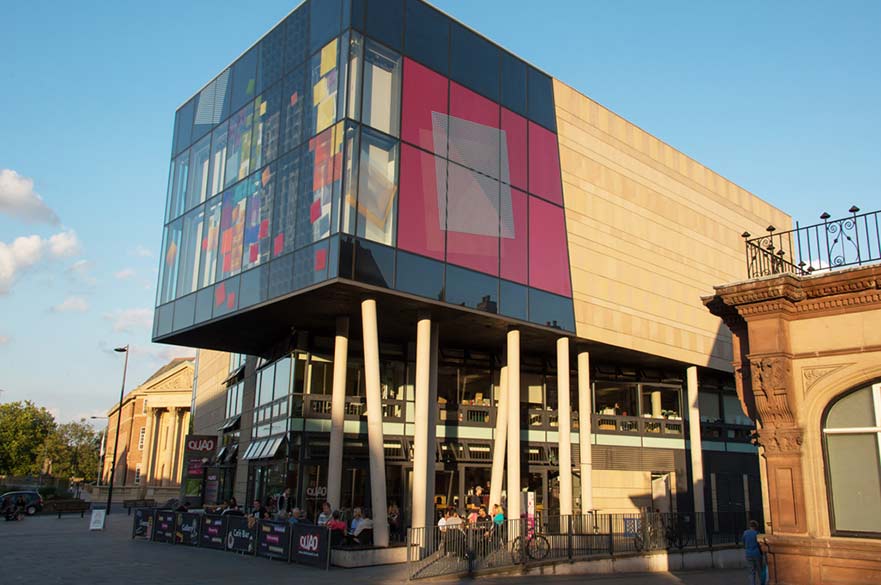 Films and exhibitions have been confirmed for QUAD’s re-opening in May. QUAD will be fully open to the public with exhibitions and film screenings from Monday 17 May 2021. QUAD Café bar will be open daily from 10:00am.

Films being screened in May are:

Nomadland, winner of Best Film and Best Director at the 2021 Oscars, as well as Best Actress for Frances McDormand. She stars asFern, who packs her van and sets off on the road exploring a life outside of conventional society.  Apples set in an uncertain, analogue version of the recent past where a disease that leaves its victims with severe memory loss. A government treatment programme prescribes sufferers to perform daily tasks and capture new memories with a Polaroid camera. Sisters With Transistors, is a documentary about electronic music’s female pioneers who embraced machines and technologies; Daphne Oram, Delia Derbyshire, Maryanne Amacher, Eliane Eadigue, Suzanne Ciani, and Laurie Spiegel.  Ammonite, set in Lyme Regis, a fictionized account of the life of the 19th century pioneering palaeontologist Mary Anning, played by Kate Winslet with Saoirse Ronan as the gentlewoman who falls in love with her.  The Sound Of Metal stars Riz Ahmed as a heavy metal drummer who is forced to re-evaluate his place in the world after losing his hearing and choose between his new Deaf community and holding onto what has previously defined him.  Minari is a funny, moving and sharply insightful film about a Korean-American family who, in search of a better life, move Arkansas to start a farm specialising in Korean vegetables. Undergods pulls together some darkly humorous, science fiction-fantasy tales about human weakness and doomed fortune; as a series of people see their worlds torn apart through a visit from an other-worldly stranger. First Cow is set in the 19th century Pacific Northwest where a fur trapper joins a Chinese immigrant in a highly successful business, however it is perilously reliant upon the clandestine participation of a nearby wealthy landowner, played by Toby Jones, and his prized milking cow.

Calling Doctor Jones is a short season travelling the world with cinema’s greatest adventurer/archaeologist Dr Henry Jones Jr. aka Indiana Jones! With Raiders of The Lost Ark, Indiana Jones And The Temple Of Doom and Indiana Jones And The Last Crusade. For families, May ‘Cine Kids’ films are new versions of familiar favourites; In Tom & Jerry (cert tbc) the old rivalry between Tom Cat and Jerry Mouse spills over onto the big screen (Saturday 29th & Sunday 30th May). Over half-term, in Peter Rabbit 2 (U) Mr McGregor is now happily married and living alongside Peter and his rabbit family. But bored of life in the garden, Peter heads to the big city and naturally creates chaos for all his family.QUAD will also continue ‘Cinema At Home’ and ‘QUAD Player’ which offer feature film screenings from independent distributors which can be accessed online, plus additional free film content from local filmmakers.

In QUAD Galleries, three exhibitions are part of FORMAT21 Presents which are highlights of the FORMAT21 International Photography Festival.

Black Country Dada by Brian Griffin is an exhibition of selected images from the acclaimed autobiography, Volume II Black Country Dada, by celebrated photographer Brian Griffin. Griffin achieved early recognition in the 1970s and 1980s, inventing a new photographic style known as Capitalist Realism in which he captured the different workers of society, transforming workplaces into stages and his subjects into actors. The images recount his student days at Manchester Polytechnic alongside photographers Martin Parr and Daniel Meadows; his arrival on the photography scene in London and developing his signature style of surreal portraits. His move into commercial photography shows him working with Stiff Records and creating some of the 20th century's most iconic album covers, including for Joe Jackson, Siouxsie Sioux and Iggy Pop to his move into advertising with Saatchi and Saatchi.

Famous Internet Sites by artist Zou Jingyao, focuses on reimagining places made famous by the internet as ‘flash mob exhibitions’ created for people to go and take selfies. The project was awarded the Lishui/FORMAT Award 2019, as part of FORMAT’s partnership with Lishui International Photography Festival, China.

Finally Here There and Everywhere is a group exhibition with three emerging artists - Uzoma Chidumaga Orji (Nigeria) Anthony Bila and Sipho Gongxeka (both from South Africa) have been selected from a pan-African open-call for QUAD and in collaboration with Azu Nwagbogu, includes their visionary work dealing with complex, socio-political issues; representations of daily life in townships and societal responses to lockdown.

Black Country Dada by Brian Griffinand Famous Internet Sites can be seen in QUAD Gallery from 19 May to 5 September 2021. QUAD Gallery is open Wednesday to Sunday, from 12 noon to 4:00pm. Here There and Everywhere can be seen in QUAD Extra Gallery Spaces from 17 May to 5 September 2021 QUAD Extra Gallery spaces are open daily, from 10:00am to 7:00pm. All QUAD Exhibitions are free to visit.

We are excited that we will be able to welcome customers back to QUAD at the earliest opportunity. This is an exciting programme planned for our re-opening, with new films, exhibitions and events. In the meantime, we would like to thank our Funders, Sponsors, Supporters and Stakeholders for their support, so we can continue the valuable work we do serving the community as a cultural organisation.

QUAD will be opening to the public with full COVID-compliant measures in place. The venue requires all visitors to observe current government regulations regarding social distancing and mask-wearing. There will be full information available on QUAD’s website, and signage and directions from staff around the building itself.

For the latest information on the new QUAD programme in May, please sign up to the venue’s weekly e-newsletter or visit the QUAD website to see times and book tickets.