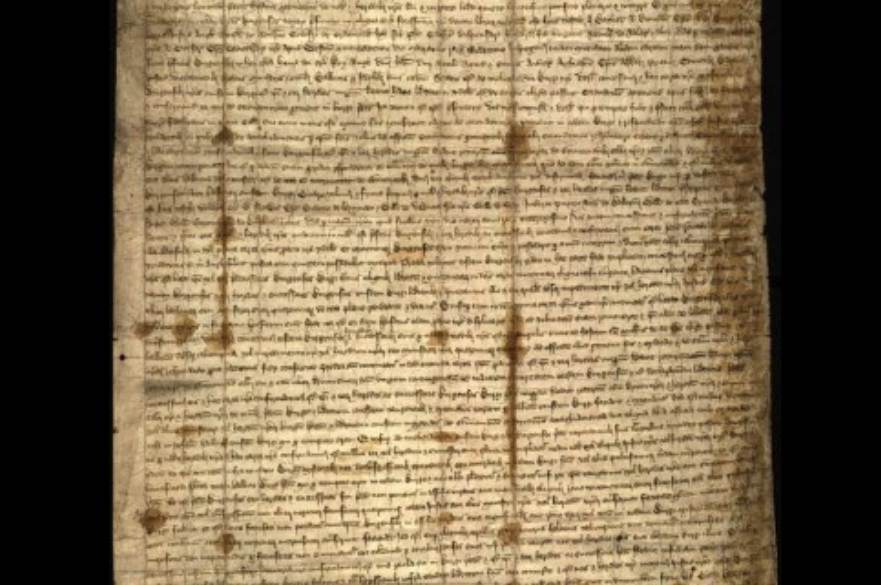 A document dating back to the reign of King Richard II has been recovered, restored and translated after it had thought to have been severely damaged in the Guildhall fire of 1841.

The document known as an ‘inspeximus’, from the Latin ‘we have Inspected’, was issued to the burgesses of Derby in 1378 as a confirmation by the new King of privileges granted by his predecessors and contains verbatim the privileges granted by two earlier monarchs – King Henry III (1216-1272), and King Edward III (1327-1377). The burgesses had undoubtedly requested this new confirmation and had to pay a substantial sum for it.

Whilst the document has no legal force today, having been superseded by other legislation over the years it is an important symbol of the town’s long history as a major urban centre in the Midlands of England, that saw it elevated to city status in 1977. It is also an important chance survival for little of the early records of Derby survive today, most having been lost in the devastating Guildhall fire of 21 October 1841.

The document contains two charters of King Henry III dating to 1229 and 1256, and a confirmation of Edward III granting additional privileges:

The project to recover the information on the document is thanks to the Freemen of Derby who then approached the Council to help them get a definitive translation. The Local Studies Library, who supported the project, hold the original document and originally approached the Freeman and provided copies for the translation work, which is now also held at the library.

Ann DaSilva , Secretary and Trustee of the Freeman of Derby, said:

Speaking on behalf of the Freemen of the City of Derby it gives us great pride to have been able to pursue the translation of this historic document giving us an insight to the life and times past of our beautiful City.

This is just a fascinating discovery that shows just how long Derby has had a thriving market, albeit only on a Thursday and Friday back in 1378!

We were delighted to support the Freemen of Derby in the translation of such an important document and we hope that in time we will be able to display the inspeximus in the Market Hall for all to enjoy.

The publication, The Liberties and Privileges of the Town of Derby. The 1378 Confirmation of King Richard II, and Other Royal Grants, and the summary text ‘The Inspeximus of King Richard II of the royal charters for Derby, 15 March 1378’, researched and written by Dr Simon J. Harris, were commissioned by The Freemen of the City of Derby (hereafter ‘The Freemen’) and Derby City Council (hereafter ‘The Council’). The right of the author Simon J. Harris to be identified as author of these works has been asserted in accordance with section 77 of the Copyright, Designs and Patents Act 1988.