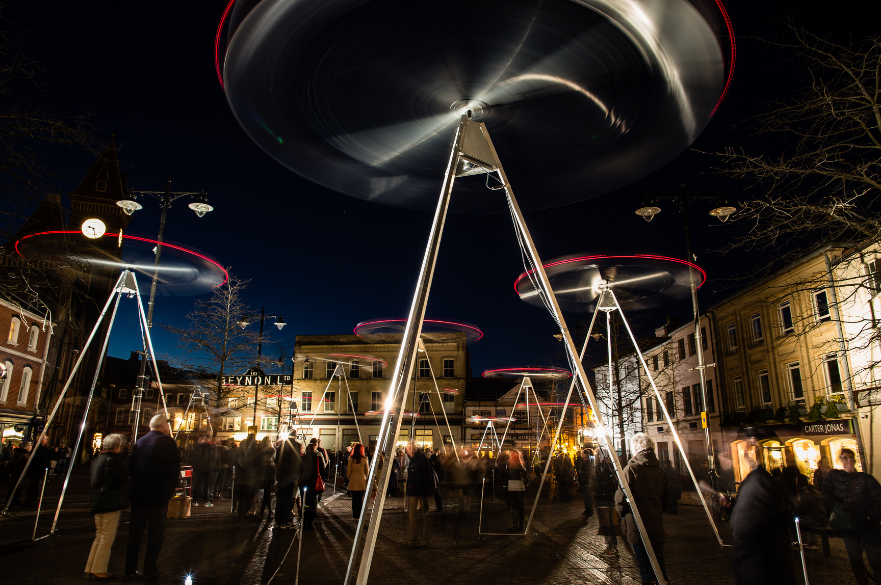 Chorus is a monumental installation of giant kinetic sculptures, a celestial choir of spinning sound machines

This year’s compelling programme features a host of world-acclaimed and exciting up and coming artists who will bring the city centre streets to life with contemporary and unique music, dance and street theatre performances.

The family-friendly event has been a key feature in the Derby festivals calendar for many years – previously attracting more than 30,000 visitors and featuring dance, contemporary circus, music and comedy street entertainment from across Europe.

Derby Festé is produced and presented by Déda, Derby LIVE, QUAD and Derby Theatre and it is funded by Arts Council England and Derby City Council.

Steve Slater is the is the Artistic Lead of Derby Festé and Director of Déda in Derby which is the city’s nationally-renowned centre for dance, contemporary circus and outdoor performance.

He said: “Since 2007, Derby Festé has existed to bring surprise, enlightenment, entertainment and amusement to local communities and visitors alike and is an important element in the city’s bid to be the UK City of Culture 2025.

“Last year we organised Derby Well in the city which was inspired by the traditional Derbyshire Well Dressing festivals and was well received by people keen to re-engage after the first major lockdown.

“We are delighted to return with a more recognisable Derby Festé programme this year and I think there will be a real appetite amongst people of all ages and communities to enjoy this cultural celebration.

“The last full Derby Festé programme in 2019 which was a particular triumph with thousands of visitors enjoying a diverse programme ranging from the ‘Museum of the Moon’ in Derby Cathedral to the dramatic ‘Malaya’ on Bass’ Recreation Ground.

“This year’s Derby Festé celebrates being present in the moment, opening your mind to the incredible imagination of talented artists and just marvelling in the spectacle that is before you.

“The joy of Festé has always been to bring people of all ages and communities both local and further afield together to enjoy performances that you would usually only see in large UK and European cities.

“As part of the City of Culture Bid it is also important to us to think about the legacy of the event, and Tim Etchells Neons will be shining out for months after the Festé weekend and look forward to seeing people’s reactions.”

Highlights over the three days include:

Location: The Spot, Cathedral Green and Déda in Chapel Street

Etchells’ works have been presented all around the world, from Gwangju to Berlin, with New York, Derry, Rome, Lisbon and Blackpool in between and are well known for their comical and poignant dialogue with everyday spaces and landscapes. For Derby he will create a series of playful interventions in the city – poetic and provocative fragments in light and language which will ask us to look again at the environment we know so well.

Through simple thought-provoking phrases spelt out in neon, LED and other media, Etchells strives to create miniature narratives, moments of confusion, awkwardness, reflection and intimacy in public and gallery settings.

The installations will stay lit and be a regular feature in the city centre locations until January 2022.

Times: Friday - 8pm and 9pm; Saturday and Sunday – on the hour between 2pm and 9pm

Ray Lee is an award-winning artist and British Composer of the Year. Ray’s latest piece, Chorus is a monumental installation of giant kinetic sculptures, a celestial choir of spinning sound machines.

Towering above the audience, a series of giant metal tripods support rotating arms. At the end of each arm, loudspeakers emit precisely tuned musical pitches, singing out a siren call to all those present. Tiny lights create the effect of planets in motion, creating mesmerising orbits of colour. These intersecting lights trace rings above the heads of the audience, while the combined chorus of the spinning speakers creates a hypnotic, harmonious whole that is both uplifting and transfixing.

Future Cargo is a sci-fi dance show performed in a 40 foot haulage truck. Imagine that a truck arrives from an unknown location loaded with a mystery shipment. As the sides roll up a strange and unstoppable process is set into motion.

Audiences experience the strange and unstoppable process of Future Cargo through binaural headphones, which are the tickets for the show.

These need to be pre-booked from the Déda box office and cost £5 for adults and £3 for under 12s. Numbers are limited to make the performance Covid-safe.

Street theatre, music and dance performances include ‘Choreography For the Running Male’; ‘A String Quarter’; ‘Born to Protest’; ‘SIB Y OSIS’; ‘Lifted’ ‘HENGE’ live music set; jazz by the Phil Robson Organ Trio and the return of Gandini with ‘Smashed 2’.

As well as workshops and exhibitions at both QUAD and Déda the Museum of the Making will be open throughout the weekend.

For more information about all the acts, please visit the Derby Festé website and follow on social media channels #Festé21