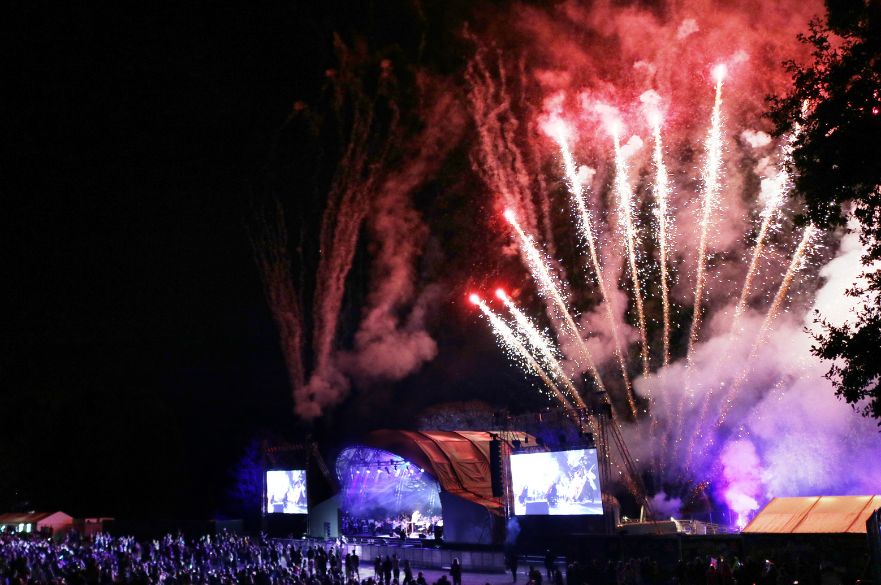 Spectacular Fireworks above the Darley Stage 2022

After another successful year, The Darley Park Weekender will return in 2023, boasting an all-new event.

The weather was beautiful for this year’s Darley Park Weekender, making it the place to be in Derby this August Bank Holiday. Thousands of families and revellers enjoyed a wide mix of music across the weekend. Audiences gathered their picnics to enjoy the show, while the younger audience members got to enjoy this year’s inflatables, along with getting their face painted.

The white isle inspired Classic Ibiza got things started on Friday 26 August with the finest Balearic beats and a live orchestra. On the Saturday 27 August the new event 80s Mix Tape proved a welcome new addition with 80s icons, Nik Kershaw, Carol Decker and DJ Pat Sharp transporting the crowds back to the 80s. The return of the much-loved Darley Park Concert on Sunday 28 rounded the weekend off with a family friendly event complete with spectacular firework display.

Families and friends journeyed to Darley Park this August Bank Holiday as over 12,000 people settled in to enjoy one of our three unique events. Classic Ibiza was welcomed back by a mass of glow sticks as audiences enjoyed Ibiza classics such as Insomnia, Sun Is Shining (Funkstar De Luxe vs. Bob Marley) before closing out the night with floor filler Firestarter. Former Pacha DJ Jose Luis began the evening with his sublime Chill-Out set, before the Urban Soul Orchestra and DJ Goldierocks turned up the tempo in the Sundowner set. DJ Goldierocks left the crowd wanting for more as her own House set set against the backdrop of the amazing laser show brought the event to close.

The ever-popular Darley Park Concert wowed audiences as Sinfonia Viva treated an audience of over 8,500 to music, which celebrated the Queen’s jubilee and Sinfonia Viva’s 40th anniversary. The evening closed with an impressive crescendo of music which accompanied the show stopping fireworks.

Sinfonia Viva, supported by Rolls Royce brought a programme of familiar hits from the stage and screen such as Phantom: All I ask of You, by Andrew Lloyd Webber, Chariots of Fire, by Vangelis and Star Wars: Imperial March, by John Williams.

It’s been an absolute delight to the see the city come alive for The Darley Park Weekender. This event to continues to get bigger and better year on year, bringing more people to our great city to
experience music together in the beautiful setting of Darley Park. After the pandemic, events like these not only bring us back together but help support talented musicians within on our region and further afield. The Darley Park Weekender 2023 is already shaping up to put Derby on the map for outdoor experiences next year, with an enviable line-up which is not to be missed!

With even bigger crowds than 2021 enjoying the weekend, it’s no surprise that The Darley Park Weekender will return in 2023.

Joining the line-up for the first time in 2023 is brand new event, Ultimate 90s on Friday 25 August 2023. Joining the Darley Park Weekender will be some of the best known 90s pop names including girl band Atomic Kitten which was formed in 1999 and have enjoyed global success, boy band East 17 who achieved eighteen top 20 singles and four top 10-albums and became famous in the mid-90s for their ‘bad boy’ image. Also appearing will be boy band Five who rose to fame in the late 90s, producing hits such as Everybody Get Up, and Slam Dunk Da Funk being instant 90s anthems and Peter Andre who is best known for his successful TV and music, producing the unforgettable 90s hit Mysterious Girl.

After a roaring start this year 80s Mix Tape will return on Saturday 26 August 2023 with headliner Martin Kemp, known for his acting career along with as the being the bassist in new wave band Spandau Ballet, which produced 80s anthems such as True, Only When you Leave and Gold.

There also will be music from 80s pop band ABC. With front man Martyn Fry helping us relive their greatest hits, such as Poison Arrow, The Look of Love and All of My Heart.
Rounded the line-up off is Scottish pop duo Hue and Cry. Best known for their biggest hit in 1987 Labour of Love.