City women to be trained to be active bystanders 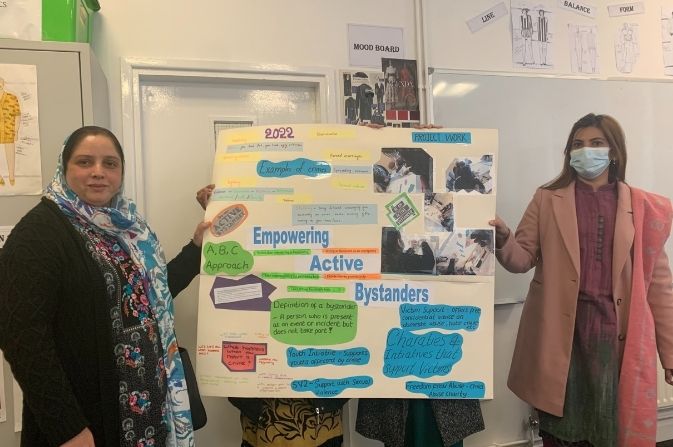 A group of Muslim women are amongst the first to receive formal training that aims to empower them to make a stand against violence and inappropriate behaviour towards women and girls.

Fifteen women are taking part in the Active Bystander training run by Central Education and Training in Charnwood Street as part of the city-wide campaign Safe Derby.

Active Bystanders are empowered to speak up, safely intervene or seek help in situations that they witness such as bullying, sexual harassment or hate crime.

The training is part of the Safe Derby campaign which is backed by the Home Office’s Safer Streets initiative and led by Derby City Council alongside voluntary and community sector partners including local specialist child exploitation charity Safe and Sound, Derby County Community Trust and Derby Community Action.

Some of the women are already trained community champions who, under the United Sisters group, support other women in their local communities - signposting them to organisations who can help with issues they are facing and flagging up issues of concern.

Tazim Fayaz is manager at Central Education and Training in Charnwood Street which supports women back into education and work. She also runs the United Sisters group to empower women to have a voice about their own experiences and concerns and to be positive members of their community. She explained:

Violence and intimidation towards women and girls is something that comes up in conversation here a great deal.

Women of all cultural backgrounds in Derby tell us that they are worried about the safety of themselves and their families – particularly in the evenings.

A lot of women from South Asian communities in particular are care workers and the fear of being out in the evening – even travelling by car – means that many are reluctant to work after teatime which is affecting their ability to earn money to support their families.

Others have told us that they have often been the target of offensive language and even intimidation for the way they are dressed.

Active Bystander training is an excellent way to build women’s awareness of how situations can escalate and give them the confidence to either safely intervene; who to ask for help and how to report an incident or situation effectively.

I hope it will make us all more confident to challenge inappropriate behaviour, offer support to people who are vulnerable to abuse and spread the word that violence in all forms, particularly against women and girls, must not be tolerated.

Among the women taking part in the training is a 44-year-old mother of three who said:

When I first moved to Derby 18 years ago I felt that it was a safe place to live. Now I feel much more concerned – largely because of people and particularly men hanging around in the streets who are obviously using drugs. I often feel intimidated walking alone in the street – even in broad daylight – because of how they look at you or things that they say.

It is also very uncomfortable to see it happening to someone else. Although it is easier to turn a blind eye and ignore a situation, the only way we are going to change this is for women to look out for other women.

It’s important that we challenge intimidating or threatening behaviour and also report incidents or concerns. Active Bystander training is important to know how to do this in a safe way and, through United Sisters, we are also able to report things in a safe space.

Another woman on the training programme is a 42-year-old mother-of-two. She said:

I have been very wary about going on my own since a guy on a motorbike was really intimidating and was making comments about how I was dressed. I got into my car, locked the doors and rang the police but it left me very shaken.

I always carefully plan a route if I need to go out after dark and would definitely not go into the park or down a quiet street. We all want to have safe and independent lives so this training is important for us to look out for each other and report when things happen.

The Active Bystander training is therefore an important element of the Safe Derby campaign which has an objective to signal Derby’s zero tolerance towards, and promotion of a city free from, gender-based violence, abuse, harassment and exploitation.”