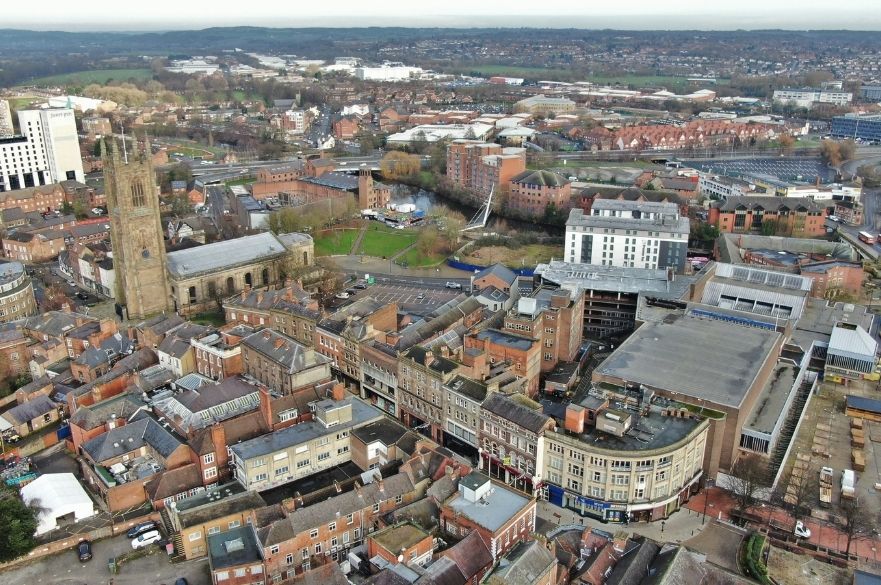 The four councils were named as pathfinder areas by the Government in February and were invited to apply for a devolution deal. The councils are now at the front of the queue and are looking to secure the earliest possible deal to bring more decision-making power into the hands of local people.

If agreed, this could create a new East Midlands Mayoral Combined Authority, leading to more major decisions being made locally and more funding for services in the region.

Key areas for greater autonomy and funding highlighted in the submission to the Government include transport and infrastructure, business growth, inward investment, strategic regeneration, destination management, employment, education, and skills. Council resources could also be pooled to make them go further.

The combined authority submission follows the publication of the Government’s Levelling Up White Paper, in which local leaders were asked to put forward a vision for devolved powers and improved services in their area.

The four council leaders had a “very positive” meeting with Minister Neil O’Brien MP on Monday (21 March), who said that the Government is very encouraged by the level of ambition of the councils and indicated that he expected a good deal for the region could be agreed.

Derby, Derbyshire, Nottingham, and Nottinghamshire is home to 2.2 million residents, which would make a future East Midlands Mayoral Combined Authority the third biggest in the country.

The councils involved, including district and borough councils in these areas, would retain all the powers they already have. The deal would not create a new tier of Government but would bring a level of Government which already exists from Westminster to the East Midlands, to be shaped by local councils, and closer to the residents and businesses it affects.

All four councils will work with district and borough councils, businesses, and other stakeholders to look at the details of the plan, which needs to be approved by the Government. Further discussions with the Government are expected to take place soon.

The Government’s Levelling Up White Paper offers Derby and our wider region real opportunities for much needed investment. This is a significant opportunity for us to better represent our people and businesses through local level decision-making, with devolved powers and funding.

The meeting on Monday was a very positive step in our conversations with Government, which should act as a catalyst for securing our region’s fair share of national funding and support.

The East Midlands has long been overlooked, in comparison to other Combined Authority areas like the West Midlands and Greater Manchester – public spending per person is lowest in the East Midlands at £12,113 – 10% below the UK average.

We’ve demonstrated our commitment to working together, and I’m reassured by the constructive conversations between all councils.

As individual authorities we exist to serve and support our residents. We’re convinced that by leaning on our collective resources we can only improve the efficiency and value for money of services provided for our people.

This is potentially a once-in-a-lifetime opportunity to redress underfunding by successive Governments and to ultimately improve life for local people through new investment, better training and job opportunities, and upgraded and more connected public transport.

Our residents deserve nothing less than for us to seize this opportunity on their behalf and to put forward a strong and ambitious case to Government – a case that has the greatest potential to deliver the biggest improvements for our communities.

This is what we have done with today’s submission of a devolution deal, which if successful would be delivered through a County Deal devolution agreement for Derbyshire, Derby, Nottinghamshire and Nottingham.

Our case to Government builds on our many combined strengths as a region – our existing partnerships and collaboration, our place at the heart of the country, our world class universities, our commitment to green innovation, clean energy growth and improving and protecting our natural environment in both urban and rural areas.

A devolution deal would simply enable us to deliver more for local people and that’s what is at the heart of it all. Our submission to Government transcends administrative and political boundaries to deliver the very best levelling up opportunities for our region.

The East Midlands has been underfunded for many years compared to other parts of the country and so it makes sense for us to look very seriously at anything that could help to redress the balance. This isn’t just about what the Government wants from us, it’s also about what the Government can offer us – investment in jobs and regeneration and additional powers that can help us meet our full potential.

Working together with neighbouring councils, we will push hard for a devolution deal that delivers the resources for our region that the West Midlands, the Manchester City region and other regions have gained. A combined authority involving Nottingham, Nottinghamshire, Derby and Derbyshire councils would build on our existing strengths and shared vision to benefit over two million residents across our counties and cities. We have been developing plans focused on transport and infrastructure, skills and employment and climate change which could radically improve the lives and prospects of those in our communities. We need Government to back these plans and give us the best deal to benefit our region. There also needs to be further consultation and engagement with citizens before any deal is reached.

My priority, and the priority of the other council leaders, is improving the lives of local people. The Government have made it clear that to maximise the benefits which are outlined in the White Paper we need to think big, and that’s exactly what we’re doing.

We owe it to our residents, and to future generations, to be ambitious and to get the best possible deal for the county and the East Midlands, working to bring in new investment, more and better jobs, better public transport, an improved environment, and more opportunities for skills and training. That means that a high-level combined authority deal should be our focus.

If we go for a lesser option that won’t bring about the big improvements that we want to see. We want to stand alongside other areas like the West Midlands and Greater Manchester, in terms of getting our fair share of investment, having a bigger voice, and getting the means to deliver positive change for our communities.

We all know there has been underinvestment in our area when compared to London and the south-east, and this is our chance to address that. Local council leaders already work well together on large scale projects including public health, economic development, environmental strategy, and many other areas, so this would build on existing collaboration.

We still have a way to go and there is a lot to be confirmed, but this is a very positive step. Our areas have a lot in common, and I believe a joint deal makes a lot of sense.

We’re working really well as partners on this. I’m optimistic. I think the prospects for getting a really great deal for the East Midlands are high.

I’m determined to make the most of this opportunity so we can see better outcomes for our residents.