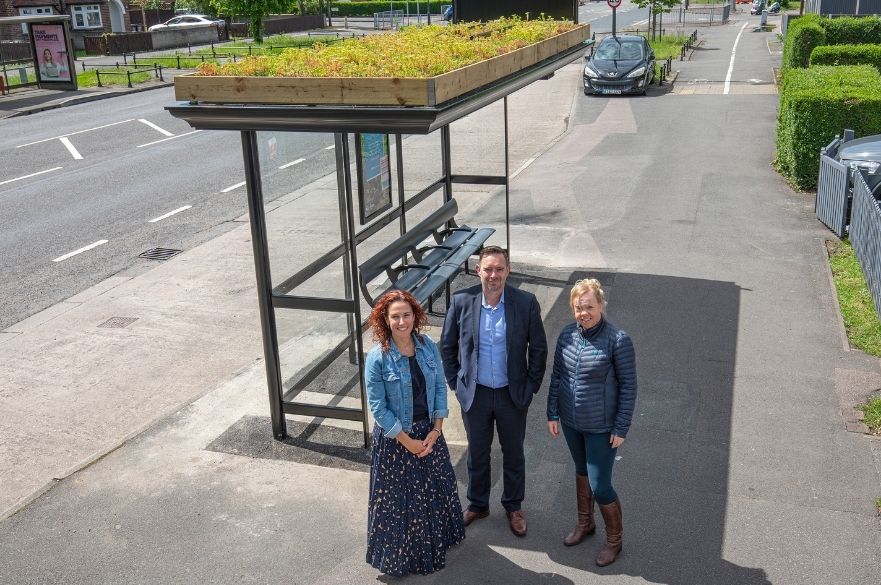 With tens of new Bee Bus Stops arriving in the city, it’s not just residents getting all abuzz about the Derby’s latest green investment project.
Announced in March, Derby City Council - working in partnership with Clear Channel - are giving bus stops across the city given an eco-friendly makeover. The first 12 new bus stops installed so far feature a ‘Living Roof’, meaning they’re topped with wildflower and Sedum plants: a favourite for bees and other insects whose numbers are sadly in decline.
Over the next 12 months 90 of Derby’s bus shelters will be upgraded, with new eco models, substantially improving the experience for the city’s bus users.
Additionally, a large number bus stops will be powered by their own solar panels, reducing reliance on electricity from the grid to power digital advertising, information screens and low-energy lighting. Clear Channel will also be working with partners to ensure that all material from the old shelters is recycled, upcycled, or otherwise avoids landfill.
Wildlife Trusts across the country, including the Derbyshire Wildlife Trust, have recently commenced a five-year partnership with Clear Channel, to help bring more Living Roofs to the UKs streets, help save wildlife in towns and cities, and bring people closer to nature. The Living Roofs have been carefully assessed for their biodiversity credentials by The Wildlife Trusts and classified as having “High Strategic Significance.”
Derby City Council are already benefitting from the expert guidance of Derbyshire Wildlife Trust to support their Green City ambitions and will be playing an active part in any future developments with the city’s Living Roofs.
Paul Simpson, Chief Executive of Derby City Council commented:

“We’re keen to be more green here in Derby and this project is another fantastic example of what partnership working across the private, public and voluntary sectors can achieve.
These wonderful new bus stops from our partners at Clear Channel are a small but significant step towards our Green City ambitions.
We’re already thrilled to be working in partnership with Derbyshire Wildlife Trust on other major projects such as the rewilding of Allestree Park.”

“We’re really excited to see bee bus stops across Derby, they inspire people and communities to do more for nature and perfectly showcase how we can be creative in making space for wildlife, even in our most urban areas. We’re really proud – they are another part of our shared vision to rewild the city in partnership with Derby City Council. Derby really is becoming a greener, wilder city, and doing it in such imaginative ways!”

“We’re overjoyed to see the first Living Roofs being installed in Derby. The council have bold, ambitious plans to become the greenest city possible, and we’re exceptionally proud that we’re able to play our part. We hope the citizens of Derby love them as much as we do.”