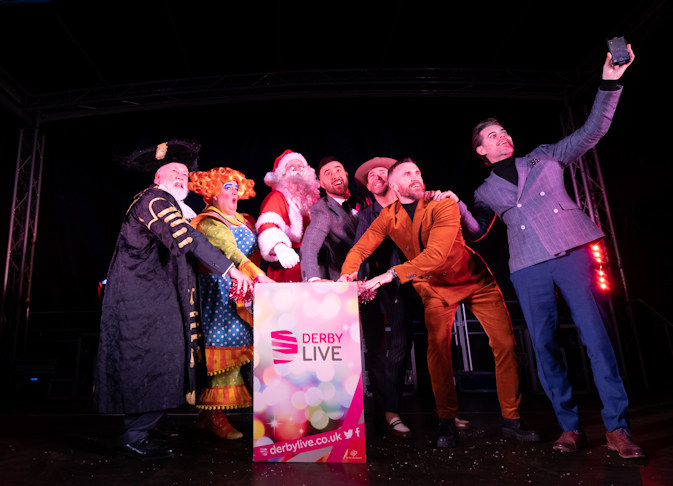 Saturday's Christmas Light Switch-On event in Derby city centre was a huge success, drawing an estimated crowd of 5,000 people. Hosted by Smooth Radio breakfast presenter Gareth Evans, the afternoon saw a multitude of local talent on stage and in a lantern parade led through the city centre.

A parade of hundreds of people carrying lanterns began at St. Peters Cross and proceeded down St. Peters Street, Corn Market, and Market Place, ending at Tenant Street. The procession was led by Surtal Arts Season of Light Lantern Parade, a Derby-based South Asian arts organisation. The drummers from ‘Dhol Frequency’ and the Chinese dragon dancers from ‘DANS Dance Company’ were followed by Father Christmas, who this year arrived in a Rolls Royce Dawn rather than a sleigh and was accompanied by Morgan Brind, the pantomime Dame in Aladdin.

First to take the stage on Corporation Street was ‘Cassette Roulette’, who started the performance by energising the audience with a mix of timeless hits, contemporary masterpieces, and Christmas favourites.

Next up was the ‘Adele Francesca Performance Academy’, a dance act which entertained the crowd with a fusion of dance styles including Street Dance, Afrobeats, Hip hop and contemporary.

Following on, the ‘Local Vocals’ from West End Community Centre brought us their upbeat and energetic renditions of numerous Christmas favourites and a catchy performance from Derby grime artist, ‘KayGee’.

Mayor of Derby, Councillor Robin Wood thanked everyone who had made the event possible and introduced Nisha Nash, chairperson of Surtal Arts, who praised everyone involved in the Derby Season of Light Lantern Parade and was followed by stage performances from ‘Dhol Frequency’ and ‘DANS Dance Company’. 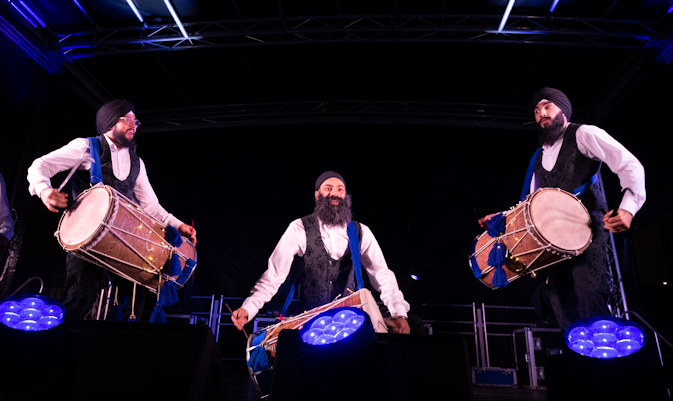 The must-see this year was our headline act, The Overtones. A British Multi-Platinum selling group with 5 top ten records, over a million album sales & 11 sell-out UK tours. Over the last decade, they have been a household name having appeared on countless TV and radio shows including Dancing on Ice, This Morning, BBC Breakfast and ITV’s Lorraine. 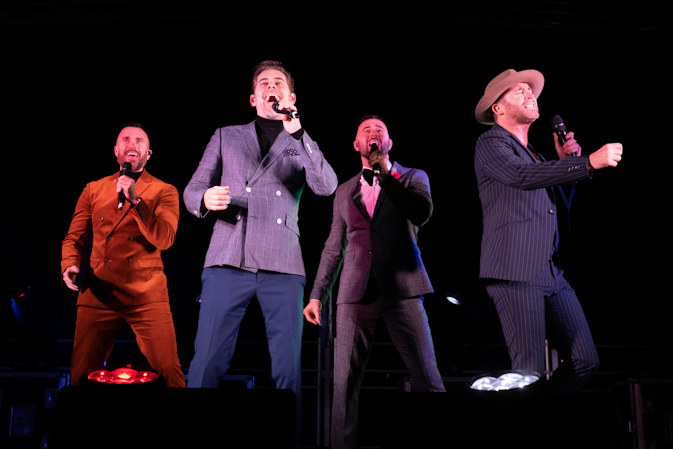 The Overtones, Father Christmas, Gareth Evans, Dame Morgan Brind and the Mayor all pressed the plunger to turn on the city's lights and set off a magnificent fireworks show over the Council House to mark the grand finale.

The event was produced by Derby LIVE, Derby City Council’s events arm, with the support of Derby Season of Light, Surtal Arts, and our media partner Smooth Radio.

“I’d like to thank everyone who took part in the Lantern Parade and the talented local acts who provided entertainment for the crowds this Saturday. It demonstrates the abundance of creativity and flair we have here in Derby.”

There are heaps of Christmas activities available this year! The Cathedral Quarter Ice Rink will be back at Derby Market Place, and The Babbling Vagabonds will present a fantastic Christmas show there called The Christmas Toy Shop Mystery. By popular demand, The Lost Boys with A Christmas Carol are also returning.

On the weekends in December, Derby Market Place will also provide free entertainment as our Festive Cabins sell Christmas gifts along with delicious festive food and drinks.

Other amazing events include performances by Déda and Derby Theatre, concerts and events at Derby Cathedral and St. Werburgh's Church, activities at Derby Museums, crafts with ArtCore, and much more.

The pantomime this year, Aladdin, will be at Derby Arena, and on December 3 and 4 and Markeaton Park will host free family festivities.

Additionally, a variety of events will be available thanks to our city partners. Children are invited to the free Santa's Grotto hosted by the Cathedral Quarter BID. There will also be free Christmas entertainment at The Waterfall and a huge snow globe in Market Place.

You can find out more information and see the full programme on the Festive Derby website.