Hundreds flock from around the UK for Derby Folk Festival 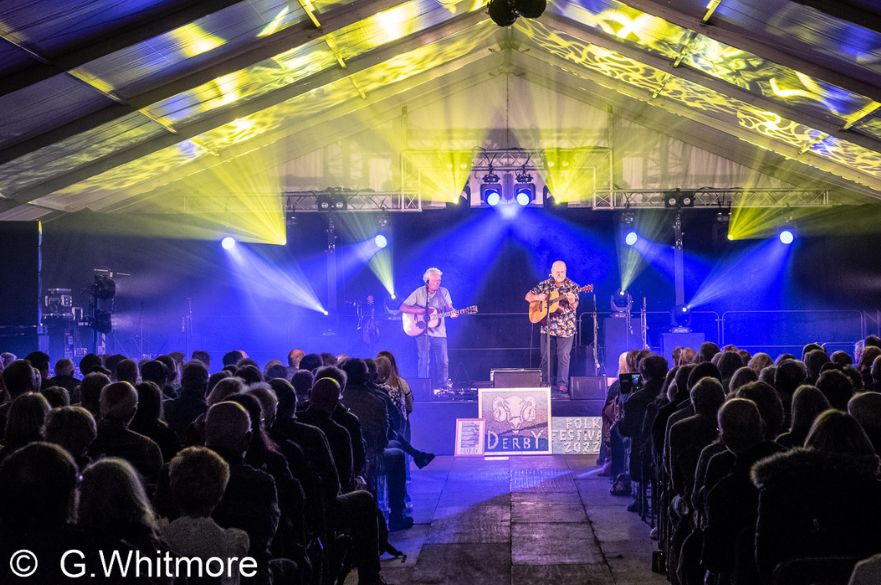 Derby Folk Festival was welcomed back for the 16th instalment this past weekend and people turned out in force.

With both free and ticketed events across the city, Derby was the place to be for live entertainment. Hundreds of folk and live music fans enjoyed the festivities across three key venues along with fun Fringe entertainers supported by our partners The Old Bell Hotel, QUAD, Museum of Making and Cathedral Quarter. Over 70 musicians and 100 dancers provided their talent for the weekend and helped us to create the city centre celebration which brought Derby together.

The festival was a fantastic success with well over 700 paying audience members joining us for ticketed events along with over 60 guests, and hundreds more enjoying the free fringe events across the city. People travelled from as far as the Netherlands, Germany and Southern Ireland to join us!

The festivities began on Friday 30 September at The Old Bell Hotel with a Welcome Ceilidh which set the friendly and relaxed tone for the evening of music in the venue which also featured performances from Treacle City Dance Band and Winter Wilson.

Elsewhere, Derby Cathedral hosted From Pub to Pulpit; a celebration of Ralph Vaughan Williams’ 150th anniversary. The concert included music from Broomdasher, Coracle, and the Cathedral’s own choristers directed by Alexander Binns. Throughout the performance, audiences were also dazzled by the ‘Gaia’ artwork in residence at Derby Cathedral between 22 September and 16 October.

Under the lights of the Mick Peat Stage, Friday began with a showcase of female talent with local patron Lucy Ward began proceedings with her set followed by a performance from Lady Nade. Audiences were then treated to headliners Sound of the Sirens who closed the evening with their performance. The onsite bar was provided by Little Brewing Co who provided a wide range of beer, cider, wine and soft drinks.

Saturday morning hosted Marc Block at Derby Cathedral while The Old Bell Hotel was home to Fringe music events featuring performances from Arbrevyn, Darren Claxton and more. The Mick Peat Stage was a hive of activity later in the day with Winter Wilson, Granny’s Attic, The Pitmen Poets, Bob Fox & Billy Mitchell and headliners Spiers & Boden all having performed. Derby Cathedral then hosted The Carrivick Sisters along with Janice Burns & Jon Doran along with Hannah Sanders & Ben Savage. Not forgetting the famous flash mob ceilidh which took place at the waterfall on the marketplace which saw everyone get in the full folk spirit.

Taking us into the final day of the festival was Janice Burns & Jon Doran, Baggaley & Varnam, Lucy Ward and Robb Johnson in The Old Bell Ball Room. Wrapping things up on The Mick Peat Stage was a performance of the hilarious folk musical: Nelly followed by performances from Jez Lowe, Narthen, Baggaley & Varnam and headliners: Kathryn Roberts & Sean Lakeman.

Fringe performances also took place throughout the weekend at the Museum of Making, QUAD café and throughout the Derby Cathedral Quarter district. The Hoverla Ukrainian Ensemble performed at
the Museum of Making along with French/ Breton Bal-Sessions and a workshop from folk favourite Dave Wilson. In total, an impressive 450 additional visitors came to the Museum of Making last weekend as a result of the festival, with just shy of 100 of those taking part in the workshops available. Elsewhere, Christine Redfern, Deborah Short & John Adams, Marc Block, Annette Oakes, Winter Wilson, Steve & Julie Wigley and Doug & Sarah Matthews also provided relaxed acoustic sets at QUAD’s Café with around 200 combined audience members throughout. It was all about dance in the Cathedral Quarter, where After Dinner Clog, Makeney Morris, Restless Soles, Black Pig, Liberty Hill, Chip off the Old and Heart of Oak wowed an estimated audience of 1500 spread across the weekend.

It’s been great to see yet another successful year for Derby Folk Festival. This event significantly adds to the cultural offering in the city of Derby, helping attracts both residents and visitors from the UK and beyond. The city-wide celebrations provide a fantastic range of Folk events, which has an ever-growing fan base.

We’re particularly proud to be involved in this event as it not only enhances the cultural offerings in the city benefiting residents and visitors to the city, but it also strengthens our partnership with cultural partners such as Derby Cathedral, The Museum of Making and Quad.