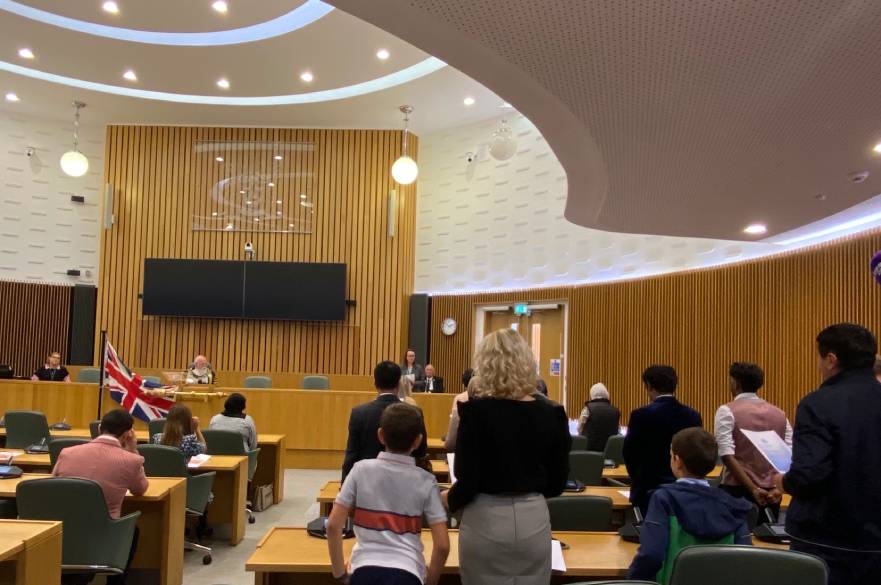 The citizens stand before the Mayor to swear their allegiance

New citizens to Derby have sworn their allegiance to the new King, His Majesty King Charles III, for the first time.

Around 40 people took part in two citizenship ceremonies in the Council Chamber on Tuesday 20 September, taking the final step in the formal process to become citizens of the UK.

It was also the first time since the pandemic that the ceremonies, which are organised and led by Derby Registration Service, have taken place at the Council House in the presence of the Mayor of Derby.

New citizens are required to swear or affirm an oath of allegiance and pledge to obey the law during a ceremony lasting about 25 minutes.

Following the death of Queen Elizabeth II, the ceremonies now involve an oath or an affirmation to King Charles III, a pledge of loyalty to the United Kingdom and end with an instrumental rendition of the National Anthem.

The Mayor of Derby, Councillor Robin Wood, welcomed the new citizens on behalf of the city and presented each of them with a certificate of naturalisation.

It is my privilege to welcome you as citizens of the UK and the city of Derby. I am delighted you have sought and been granted UK citizenship.

I hope you will use your talents and skills to make Great Britain an even better place.

You will find Derby a welcoming place with a rich diversity that created Europe’s first purpose-built Multi-Faith Centre at Derby University.

The latest new citizens originate from a wide range of countries from Jamaica to Colombia.

Chris Cole is originally from the USA and wore the Union Jack around his shoulders as he received his certificate. He said:

It’s like blending the two cultures because America’s very proud about its nationality, and I’m proud of my new nationality. It’s being part of the country, taking that full step. My kids are British as well as American.

I was wondering if the oath would be updated. The last couple of days have been, for me, very British days.

I wanted to be part of the country and this is like a dream for me because this has been a long journey. I was wondering if the papers would be changed. I feel privileged now that we are the first group in Derby.

Under the Nationality Immigration and Asylum Act 2002, all adult applicants who are accepted by the Home Office must attend a citizenship ceremony.