Speed limit signs and average speed cameras have now been installed in both directions along the A52 Brian Clough Way between the Pentagon and Raynesway junctions.

Reasons behind the speed limit changes 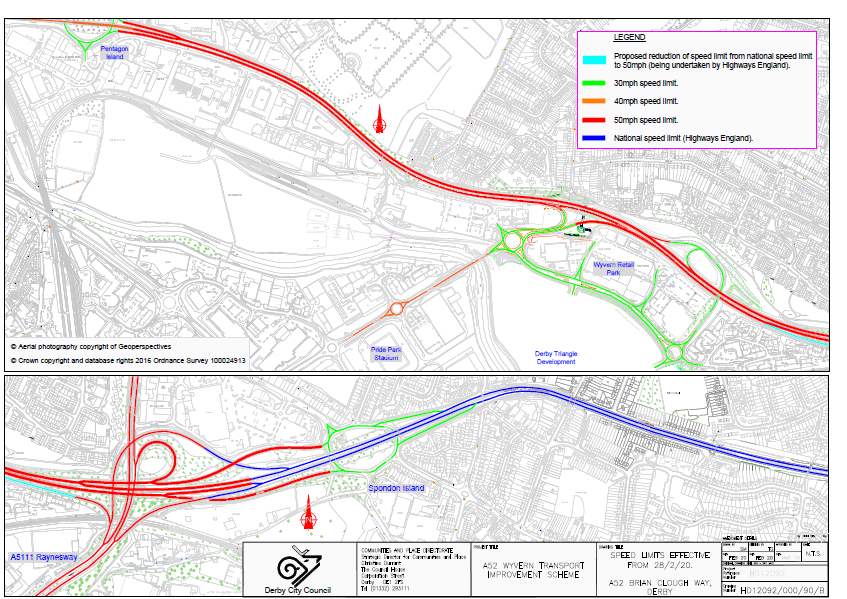 Enforcement of speed limit on the A52

The route has a poor road safety record and in a five year period prior to June 2018 the Police recorded 107 collisions on the A52 between the County boundary and the Pentagon island, resulting in 162 casualties. Of these, two were fatal, nine resulted in serious injuries and the remainder involved slight injuries.

Taking into account these issues, the speed limit has been reduced from the national speed limit, to 50mph between the Pentagon island and the trunk road boundary at Spondon. This is the same as the current 50mph speed limit on Raynesway. Highways England control the A52 east of the Raynesway junction and beyond the city boundary.

The police indicated that they would be unwilling to support a reduction in the speed limit without suitable enforcement measures being in place. Due to the high speed nature of the road, it was considered that average speed cameras were the most appropriate option. Evidence suggests that average speed cameras result in higher compliance and fewer prosecutions. It is also shown that drivers travel more smoothly with improved network resilience and air quality benefits. On other routes, average speed cameras have helped to reduce collisions, particularly those where people have been killed or seriously injured.