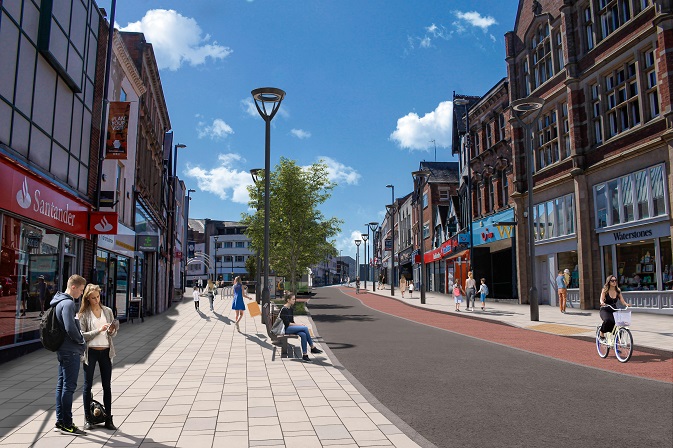 Key streets in Derby are set to be transformed as part of Derby City Council’s Mobility Programme, delivering better transport choices for the city.

More than 230 responses were received in the Council's recent consultation on plans for Babington Lane, Gower Street, and St Peters Street, most of which were overwhelmingly positive.

The proposals will make it easier and safer for cyclists, pedestrians, drivers, and public transport to travel in the area, while also reducing congestion and pollution. Fifteen new level access Blue Badge parking spaces will also be created on Gower Street, making the area more widely accessible.

One-way restrictions and a high volume of traffic made the area extremely busy, but pavements and roads in the area will be widened and resurfaced with high quality materials, and unnecessary obstructions and obstacles will be removed. New loading bays and improved bus bays will also be included to reduce congestion and improve traffic flow.

Making active travel, such as walking and cycling, easier was at the heart of the proposals. A wider cycle lane and paths will be introduced, as well as improved cycle parking. The crossings at Babington Lane and Gower Street will also be improved to make crossing easier for cyclists and pedestrians.

As part of the improvements more green bus stops will be installed, with features such as a ‘living roof’ and solar panels. New Green Taxi bays will also be included to help reduce pollution.

We were pleased with the number of positive responses to our proposals for Babington Lane, Gower Street and St Peters Street and are looking forward to starting work in the area.

These works represent just part of our on-going commitment to not only provide an improved travel experience in the city centre, but also to improve the overall look, feel and standard of our city centre streets to a level that residents rightly expect.

This project is not the final word in delivering better transport for the city, and we’re looking forward to delivering further improvements going forward.

Works are set to begin in the area from September and are expected to be completed by Summer 2023. The Council will work with businesses and transport operators to ensure minimal disruption.

These works are part of Nottingham and Derby’s Transforming Cities programme, funded by the Department of Transport and delivered by Eurovia on behalf of Derby City Council.