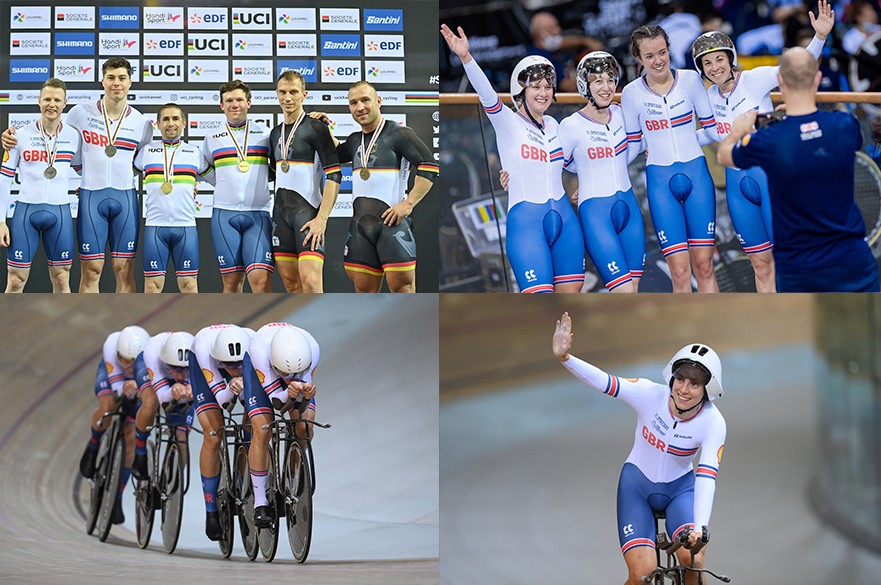 Great Britain’s top cyclists are celebrating international medal success in their latest competitions after training at Derby Arena. The Brits picked up a total of 40 medals across two separate championships during the past fortnight.

The Great Britain Cycling Team has been based at Derby Arena while their usual home, the National Cycling Centre in Manchester, is being refurbished. As the country’s newest indoor velodrome, Derby Arena is fast securing a reputation for excellent facilities, camaraderie between riders, and support from professional coaches.

During the UCI Track Cycling World Championships, which took place in France from October 12 to 16, Neah Evans won gold in the Women’s Points Race while Ethan Hayter came top in the Men’s Omnium. Ethan also won another gold – alongside Dan Bigham, Ethan Vernon and Ollie Wood – in the Men’s Team Pursuit.

Just a few days later, Great Britain celebrated its most successful UCI Para-Cycling World Championships to date. Members of the team, who took part in the event from October 20 to 23, have been training at Derby since the summer.

One of the competition’s success stories was Fin Graham, who took the men’s C3 omnium world title in straight event wins, not dropping a single point across the competition. Added to his individual scratch race and pursuit titles, he went home with a total of three rainbow jerseys – a phenomenal track world championships performance.

Councillor Jerry Pearce, Derby City Council’s Cabinet Member for Streetpride, Public Spaces and Leisure, said: “Huge congratulations to all the British cyclists on their phenomenal world championship success. It’s wonderful that Derby Area has played an important part in this.

With only five indoor velodromes in the UK, we’re proud to offer this superb facility. The best thing about Derby Arena is that it’s for cyclists of all abilities, from beginners to elite riders. Anyone can have a go with the support of our expert coaches.

Anyone can try track cycling at Derby Arena, under the guidance of expert coaches. If you fancy riding on the same track as Great Britain’s elite cyclists, check out our cycling page.