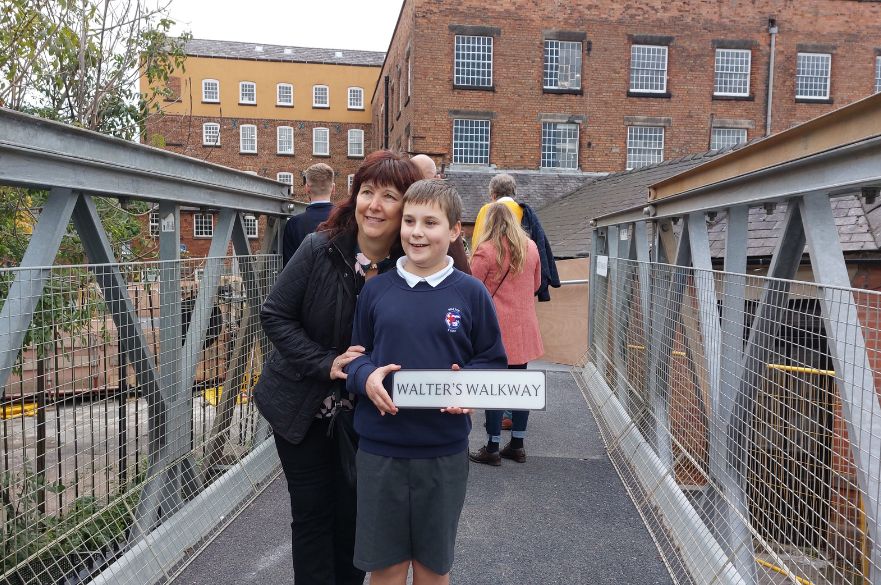 Samuel Jones and his Mum on Walter's Walkway after it opened

On Thursday 6 October, residents and businesses alike rejoiced as the new temporary footbridge across the River Derwent in Darley Abbey was officially opened.

Young resident and local school pupil, Samuel Jones was the first to cross the bridge as a competition winner after he came up with the name ‘Walter’s Walkway’ for the new bridge. After unveiling the nameplate, Samuel and his mum made the inaugural journey over the bridge to applause and cheers from residents and local businesses.

The 46-meter-long footbridge was lifted into place via a 500 tonne capacity crane on Friday 23 September.

The footbridge opening marks a major step forward in keeping two areas of the city linked after the existing bridge was closed to all traffic in May this year. A series of inspections by Engineers showed that the bridge was unsafe, and it was closed.

The current footbridge is expected to be in place for the next 12 months while a permanent solution is developed by Council Officers.

The new footbridge is key to keeping local people and businesses linked. I’m thrilled to see and hear how welcome the temporary footbridge is for everyone. I’d like to say a huge thank you to residents and businesses for their patience whilst officers worked to deliver a solution and I’d also like to pass my thanks on to the teams who all worked extremely hard to get the bridge into place, made safe and open to the public.