The full Aladdin cast has been announced – oh yes it has! 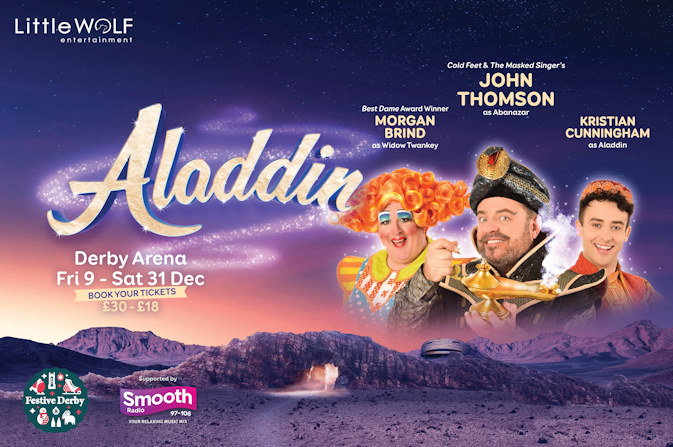 The full cast has been announced for this year's panto

It won’t be long before Aladdin hitches a magic carpet ride to Derby Arena ahead of this year’s annual pantomime. Therefore, we are proud to announce this year's cast who will be taking to the stage to bring audiences some festive magic between Friday 9 - Saturday 31 December.

As previously announced: John Thomson, well known for his performance as Pete Gifford in the hit ITV comedy Cold Feet, will be taking to the Derby Arena stage as the wicked sorcerer Abanazar; and fan favourite Morgan Brind (2022 Panto Awards ‘Best Dame’) will return to Derby as Widow Twankey, as well as co-producing, writing, and designing the show.

They will be joined by a cast of incredibly talented performers: 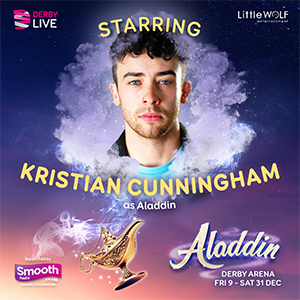 Derby local Kristian Cunningham is delighted to be joining the team at the Arena as Aladdin after performing with Little Wolf Entertainment in their Loughborough productions for the past five years. Having previously been directed by Morgan Brind, Kristian is looking forward to sharing the stage with him. Kristian’s previous acting work includes Forgotten Melodies (UK Tour Trailer) and Buttons in Cinderella (Wilde Theatre). 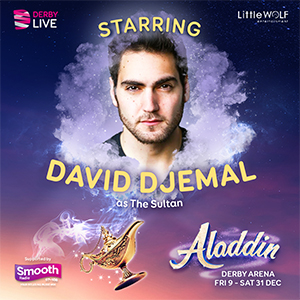 The Sultan will be played by David Djemal, an actor and writer who has been performing professionally since the age of nine. David studied acting at the Stella Adler Studio of Acting in New York, the Yoram Lowenstein Studio for Performing Arts in Tel Aviv, and is also a graduate of the Royal Academy of Music in London. He has featured in productions such as The Wetsuitman (Foreign Affairs); De Haan in Demons Of Jerusalem (The Glory) and Aladdin (Mercury Theatre Colchester). 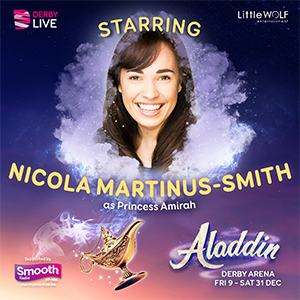 Our glamourous Princess Amirah will be played by Nicola Martinus-Smith. She trained at Colins Performing Arts Studios before featuring in The Snow Queen (Everyman Theatre, Liverpool), The Wizard of Oz (S4K International) and Aladdin (Theatr Clwyd, North Wales). 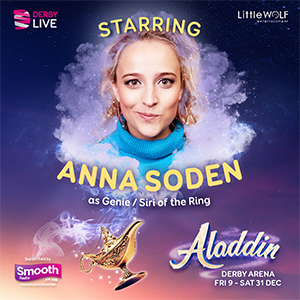 Anna Soden will be channelling her inner Genie as she takes on the role of Siri of the Ring. Anna trained at Mountview Academy of Theatre arts and has just finished playing Nicola in the first UK revival of Kinky Boots. Her other theatre credits include Romeo and Juliet (China Plate, UK Tour), Sleeping Beauty (Liverpool Everyman) and Return to Elm House (Battersea Arts Centre). 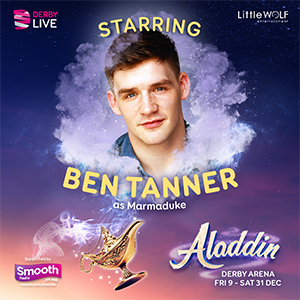 Last but certainly not least, Ben Tanner will complete this year’s cast when he takes to the stage as Marmaduke the Monkey. Ben trained at Bird College of Dance, Music and Theatre Performance and has featured in Peter Pan (Malvern Theatre); Elf: The Christmas Spectacular (UK Arena Tour) and Peter Pan (UK Arena Tour). Ben is also a highly trained gymnast and is the Technical Artistry Coach for the Men's English Gymnastics National Squad.

So, now you’ve met the cast it’s almost time for you to join us in the humble town of Shangri-La (also known as Derby Arena) for a healthy serving of Christmas cheer and panto mischief.

All that’s left to do is secure your seat, pre-book your parking voucher and order a programme!

Helping to make the magic possible this year is Smooth Radio, we’d like to thank them for their support.

Aladdin will take to the stage between Friday 9 and Saturday 31 December.  Tickets are on sale now with prices ranging from £18 - £30 depending on the performance. Concessions are available along with BSL, relaxed, audio described and captioned performances. Tickets can be purchased on the Derby LIVE website, at the Sales and Information Centre Guildhall Theatre, Market Place, Derby, DE1 3AE, or by calling 01332 255 800.